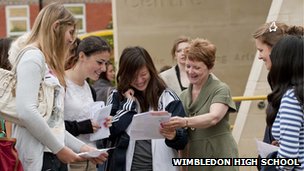 A top girls’ school is planning a “failure week” to teach pupils to embrace risk, build resilience and learn from their mistakes.

The emphasis will be on the value of having a go, rather than playing it safe and perhaps achieving less.

Pupils at Wimbledon High School will be asked how they feel when they fail.

The headmistress, Heather Hanbury, said she wanted to show “it is completely acceptable and completely normal not to succeed at times in life.”

Ms Hanbury’s pupils achieve some of the highest exam scores – but from Monday they will be invited to focus on failure.

There will be workshops, assemblies, and activities for the girls, with parents and tutors joining in with tales of their own failures.

There will be YouTube clips of famous and successful people who have failed along the way and moved on.

The emphasis will be discussions on the merits of failure and on the negative side of trying too hard not to fail.

‘Courage in the classroom’

Ms Hanbury told BBC News that she had placed a great emphasis on developing resilience and robustness among the girls since she arrived at the school four years ago.

“The girls need to learn how to fail well – and how to get over it and cope with it,” she said.

“Fear of failing can be really crippling and stop the girls doing things they really want to do.

“We want them to be brave – to have courage in the classroom,” she added.

Wimbledon High is an independent school, part of the Girls’ Day School Trust.

“Wimbledon High School is showing how making mistakes is not necessarily a bad thing, that it is fine to try – and fail – and then pick yourself up and try again – or as Samuel Beckett said, ‘fail better’.”

New York City’s Stuyvesant High, one of the city’s finest public schools, has an enrollment of 3,295 students.  This New York Times article chronicles the experience of a 17-year-old girl, one of only 40 black students in the school.

How an 8th grader used technology to improve his community and the world, http://www.edutopia.org/digital-generation-interview-dylan

An interesting New York Times article on an 8th grade boy’s success as a bowler: http://www.nytimes.com/2012/02/25/sports/bowling-with-worlds-best-then-rejoining-8th-grade.html

A New York Times article on the positive relationship between exercise and brain function: http://well.blogs.nytimes.com/2012/02/22/how-exercise-fuels-the-brain/

An article on how brain development shapes behavior.

See below for info on 3 interesting parenting lectures at the Southfield Center in Darien.

An interesting article from a pediatrician on successful parenting: http://living.msn.com/family-parenting/parenting-tips/article?cp-documentid=31973647

A TED Talk with thoughts for parents and teachers on inspiring girls to be leaders.  From the TED website: “Facebook COO Sheryl Sandberg looks at why a smaller percentage of women than men reach the top of their professions — and offers 3 powerful pieces of advice to women aiming for the C-suite.”