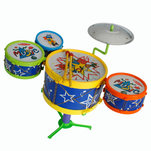 My eldest son is 20 years old, lives in a house crammed with seven scrabbly roommates, works part time in a restaurant kitchen, doesn’t drive, is a vegetarian, and has homemade tattoos etched into his thighs.

He’s firmly a musician – a drummer in a loud punk band, and he loves nothing more than to tour across North America, playing gigs in sketchy houses in Oakland, Calif., and south Chicago.

He appears to have only one pair of pants – dirty, black cutoff jeans, and his shirts are also of the ripped-off-arms variety. I’m not sure who has been ripping up all his clothes. Maybe there’s a wild dog living in his house.

I’m both proud of and horrified for my boy. His jaw is squarely set, and he’s acutely committed to what he wants to do. And that is to tour with his band in their black-panel van, crisscrossing borders, dodging death in dubious neighborhoods, sleeping on strangers’ couches, and eating vegetarian burritos.

As my children traveled through their teenage years, I emphasized to them: Find your passion and follow it. What I really meant was: Find your passion, but do it in the way I did it. That is, go to college first, get a liberal arts degree, meander through your 20s, and then supplement your undergraduate degree with graduate studies. All while wearing clean, intact clothing.

But what if, as Andrew Solomon so eloquently addresses in his masterpiece, “Far From the Tree,” your child ends up so very different from you? I read “Far From the Tree” because it speaks of children with disabilities (and my youngest son has Down syndrome), but I gained a deeper knowledge of all children who stray from their parents. If we face reality squarely, and give our children the space to be who they want to be, every single child should be different from his parents, and should be allowed and even encouraged to fall far from our trees.

My oldest boy does not show up to family events in his collared shirt and pressed pants. In fact, he rarely shows up at all. He doesn’t respond to calls from grandparents, although he will send thank you texts for birthday gifts, so he still has a sliver of decorum. He’s proudly anti-establishment, and my current lifestyle with my husband (and his stepfather) – living in the suburbs and driving a BMW – clearly disgusts him.

I watch my friends’ children embarking on their second year of college, most of them still living at home with their parents. They are clean-cut, unfailingly polite, sit quietly at dinner parties and patiently dole out answers to questions from adults. Inevitably, someone asks me, “What’s your son doing?” and then I feel a strange mix of pride and apology. “He’s living his life,” I say. “But what graduate program? What path is he taking?” “He’s not in a program,” I say. “He’s working and playing in a band.” They take a deep gulp of wine and look down at their expensive shoes.

I read a biography of Dave Grohl, the former drummer for Nirvana. In it, Mr. Grohl’s mother – a teacher herself – agreed to let him drop out of high school so he could tour with his band. She said that he was good at a lot of things, but school was not one of them. Clearly Mr. Grohl’s path did not include the traditional, go-to-college-get-a-job trajectory.

My son is teaching me that there isn’t just one way to live life. Yes, I wish he would go to college so he doesn’t live below the poverty line and reside in a house of squalor.

But that’s what I want for him. That’s not what he wants for himself. He is not the male version of me. He’s a musician, and the creative life means a guaranteed amount of struggle and heartache. Every time we meet for lunch, I tell him that I love him, and that I’m proud of him.

Even if my boy’s path never rises out of moshing in the basements of America, that’s got to be O.K., too. There are no conditions placed on unconditional love.