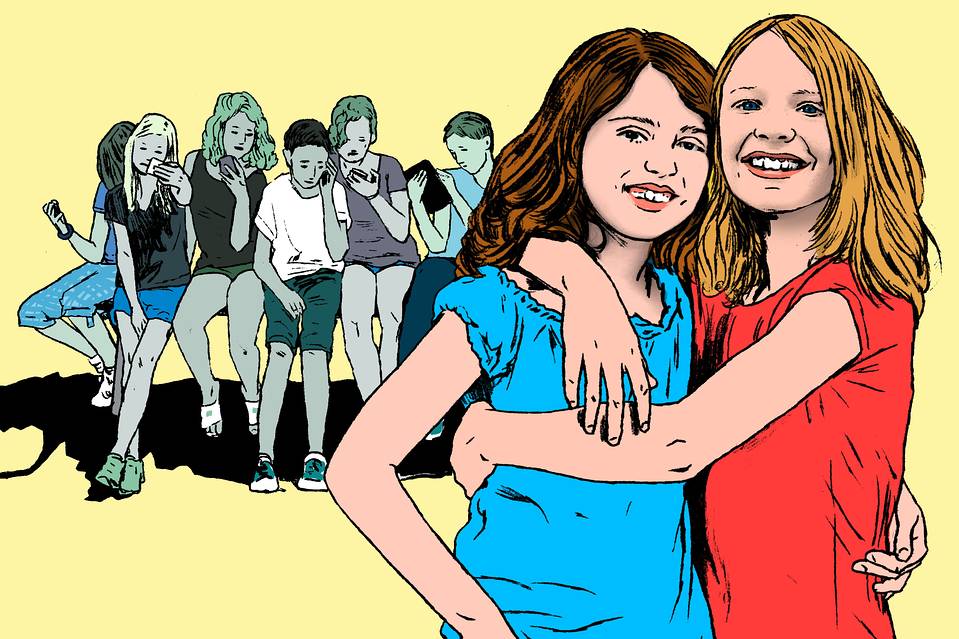 Chasing after popularity can be stressful for children—and for their parents. A growing body of research suggests that they should give a different focus to their social energies. Having intimate friendships, it turns out, brings more long-term benefits, such as higher self-esteem and lower levels of anxiety and depression.

In fact, says Princeton, N.J.-based psychologist Eileen Kennedy-Moore, the skills needed to be “popular” can be at odds with those needed for friendship, such as trust and support. The most popular kids often aren’t particularly well-liked because they engage in unfriendly behaviors (such as putting people down or gossiping) to maintain their status.

“Having one good friend is enough to protect against loneliness and to help bolster self-esteem and academic engagement,” says Cynthia Erdley, a professor of psychology at the University of Maine. In a 2011 study published in the Merrill-Palmer Quarterly, Dr. Erdley and colleagues followed 365 students as they transferred from elementary to middle school. Using self-reported questionnaires that measured things like peer acceptance, friendships, loneliness and academic engagement, researchers found that feeling accepted by peers, as well as having at least one quality friendship, served as unique predictors of both psychological well-being and academic performance during the middle-school transition.

Dr. Erdley says that one reason for the boost may be because “students who feel a sense of belonging don’t have to worry as much about what’s going on socially in the classroom, so they can save those cognitive resources to focus on their school work instead.”

In a longitudinal study published last month in the journal Child Development, researchers found that the quality of friendships during adolescence may have long-term effects. Researchers at the University of Virginia studied the friendships and mental health of 169 subjects, first at age 15 and then again at age 25. They used interviews and questionnaires to assess levels of anxiety, self-worth, depressive symptoms and feelings about social acceptance, as well as the quality of relationships. The participants’ friends were also interviewed.

The researchers found that those who had a more intimate bond with a best friend at age 15 reported less social anxiety, bigger boosts in self-worth and fewer depressive symptoms at age 25 than their peers. Adolescents who possessed a larger but less intimate social network reported higher levels of anxiety when they reached their mid-20s.

While teens who are less anxious and have higher self-esteem may find it easier to form strong friendships, the research finds that close, supportive friendships contribute to greater mental-health outcomes in the long term, no matter the baseline, says lead author Rachel Narr. Teens who have experienced good friendships gain the motivation and ability to build more supportive social networks in the future.

How can parents help their children to develop the skills for making and keeping close friends? Some tips:

Bolster conversational skills. Dr. Kennedy-Moore, the author of “Growing Friendships,” suggests a simple formula to keep a conversation going. When a potential friend asks how you’re doing, respond “Great!” plus one (that is, an additional fact, compliment or question). The “Great!” signals interest, and the statement shows that you’d like to keep the conversation going.

Read cues. To read people and situations well, children need to learn to recognize nonverbal cues, such as tone of voice, facial expression and body language. Researchers find that preteens who spend less time in front of screens are better with these cues because they get more practice. For parents, that means limiting electronics use and encouraging activities that require peer interaction.

Build rapport with “intimacy management.” To make a new friend, start by talking about superficial things, like class schedules, says Fred Frankel, a professor of psychiatry and behavior sciences at the University of California, Los Angeles. Then test the waters by moving on to something more intimate, like difficulty with a teacher. If the peer is receptive, that’s an invitation to open up more and maybe seek advice.

Practice forgiveness. All friends make mistakes. “If it wasn’t deliberate, if it’s unlikely to happen again, and the friend is genuinely sorry, encourage your child to let it go,” says Dr. Kennedy-Moore. The secret to keeping long-term friendships, and being a good friend, is knowing when to forgive and move on.

—Ms. Wallace is a freelance writer in New York.