As of Monday, the United States has new federal physical-activity guidelines. The new guidelines, which represent a scientific consensus about how much and what types of physical activities we should complete for good health, bear a strong resemblance to the existing, 10-year-old governmental recommendations. But they also feature some important updates and expansions, including the first-ever federal activity parameters for 3-year-olds, as well as a few surprising omissions.

And they offer a subtle, admonitory reminder that a substantial majority of us are not moving nearly as much as we should.

The idea that the government might suggest how much we need to exercise is relatively new. The first federal exercise recommendations were released in 2008, after several years of scientific background study.

During that time, an advisory board of researchers, most of them from academia, scoured the available scientific literature for clues about the relationships between physical activity and health and how much and what types of exercise seemed best able to lengthen people’s life spans and reduce their risks for disease.

Using that information, they assembled and presented a scientific report to the Department of Health and Human Services, which used it as the basis for the original 2008 guidelines.

Most of us probably know what those guidelines suggested.

In essence, they called for adults who are not disabled to complete at least 150 minutes a week of moderate-intensity exercise, such as brisk walking or other activities that raise people’s heart rates and breathing to the point that they can talk to a companion but cannot, should they be so inclined, sing.

The guidelines also noted that 75 minutes of vigorous exercise, such as jogging, would be equally effective but that the exercise, whatever its intensity, should take place in nonstop bouts of at least 10 minutes at a time and preferably every day.

Adults were urged, too, to do some type of strength training twice a week, while children older than 6 and teenagers were told to exercise moderately for at least 60 minutes a day.

That was 10 years ago. Since then, exercise scientists have published a mountain’s worth of new research about the health effects of physical activity — and of sitting — and of how much time we really need to spend in motion.

So two years ago, the Department of Health and Human Services convened a new panel of scientific advisers to sift through this research and provide updated exercise recommendations.

Earlier this year, that group delivered a 779-page scientific report to H.H.S., from which the new recommendations were devised.

To the surprise of some scientists and other observers, these guidelines, which were published on Monday in JAMA, are broadly the same as the previous set.

Again, they call for adults to complete at least 150 minutes of moderate-intensity exercise or 75 minutes of vigorous activity every week, along with strength training twice a week.

They also suggest balance training for older people and, for the first time, urge kids between the ages of 3 and 5 to be active for at least three hours a day, an acknowledgment that even small children run the risk of being too sedentary these days.

The most substantive change in the new recommendations involves how long each bout of exercise should be. The new guidelines say they do not need to last for 10 minutes.

Any physical activity, no matter how brief, including walking up stairs or from the car to the office, provides health benefits, according to the new guidelines, and counts toward exercise goals.

Using these parameters, “it will be much easier” for people to accumulate the desired 150 weekly minutes of moderate activity, says Adm. Brett Giroir, the assistant secretary for health at H.H.S., who oversaw the development of the formal guidelines.

This idea is captured in a new H.H.S. website cheerfully titled “Move Your Way” that summarizes the latest guidelines.

But despite this expansiveness, the 2018 recommendations do not cover some types or aspects of exercise, including high-intensity interval training. Although these brief, intense workouts are popular and widely studied, the guidelines’ writers felt that more research was needed about their safety and effects.

For the same reason, the guidelines do not set a target for how much — or little — time people should spend sitting or how many steps they should take each day, instead reiterating that the best goal is 150 minutes a week of activity.

Helpfully, the new guidelines do include some practical proposals for increasing exercise, including having health care workers ask people about their exercise habits during every appointment and employers promote physical activity at work.

But such efforts are voluntary, of course, and may be unable to overcome the greatest challenge facing the implementation of the new guidelines, which is us.

Despite 10 years of hearing that we should be moving more, few of us are.

Only about 20 percent of American adults meet the existing recommendations, and a third never work out at all, statistics show.

But Admiral Giroir says he believes that the new guidelines can and should inspire large numbers of people to get moving.

“They are so simple,” he says. “You can walk, dance, mow your lawn, park your car a little farther away. It all counts and could really make an impact on people’s health.” 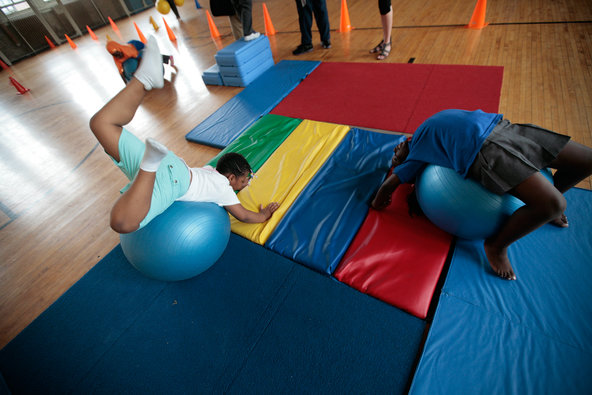 Children who are physically fit absorb and retain new information more effectively than children who are out of shape, a new study finds, raising timely questions about the wisdom of slashing physical education programs at schools.

Parents and exercise scientists (who, not infrequently, are the same people) have known for a long time that physical activity helps young people to settle and pay attention in school or at home, with salutary effects on academic performance. A representative study, presented in May at the American College of Sports Medicine, found that fourth- and fifth-grade students who ran around and otherwise exercised vigorously for at least 10 minutes before a math test scored higher than children who had sat quietly before the exam.

More generally, in a large-scale study of almost 12,000 Nebraska schoolchildren published in August in The Journal of Pediatrics, researchers compiled each child’s physical fitness, as measured by a timed run, body mass index and academic achievement in English and math, based on the state’s standardized test scores. Better fitness proved to be linked to significantly higher achievement scores, while, interestingly, body size had almost no role. Students who were overweight but relatively fit had higher test scores than lighter, less-fit children.

To date, however, no study specifically had examined whether and in what ways physical fitness might affect how children learn. So researchers at the University of Illinois at Urbana-Champaign recently stepped into that breach, recruiting a group of local 9- and 10-year-old boys and girls, testing their aerobic fitness on a treadmill, and then asking 24 of the most fit and 24 of the least fit to come into the exercise physiology lab and work on some difficult memorization tasks.

Learning is, of course, a complex process, involving not only the taking in and storing of new information in the form of memories, a process known as encoding, but also recalling that information later. Information that cannot be recalled has not really been learned.

Earlier studies of children’s learning styles have shown that most learn more readily if they are tested on material while they are in the process of learning it. In effect, if they are quizzed while memorizing, they remember more easily. Straight memorization, without intermittent reinforcement during the process, is tougher, although it is also how most children study.

In this case, the researchers opted to use both approaches to learning, by providing their young volunteers with iPads onto which several maps of imaginary lands had been loaded. The maps were demarcated into regions, each with a four-letter name. During one learning session, the children were shown these names in place for six seconds. The names then appeared on the map in their correct position six additional times while children stared at and tried to memorize them.

In a separate learning session, region names appeared on a different map in their proper location, then moved to the margins of the map. The children were asked to tap on a name and match it with the correct region, providing in-session testing as they memorized.

A day later, all of the children returned to the lab and were asked to correctly label the various maps’ regions.

The results, published last week in PLoS One, show that, over all, the children performed similarly when they were asked to recall names for the map when their memorization was reinforced by testing.

But when the recall involved the more difficult type of learning — memorizing without intermittent testing — the children who were in better aerobic condition significantly outperformed the less-fit group, remembering about 40 percent of the regions’ names accurately, compared with barely 25 percent accuracy for the out-of-shape kids.

This finding suggests that “higher levels of fitness have their greatest impact in the most challenging situations” that children face intellectually, the study’s authors write. The more difficult something is to learn, the more physical fitness may aid children in learning it.

Of course, this study did not focus specifically on the kind of active exercise typical of recess, but on longer-term, overall physical fitness in young children. But in doing so, it subtly reinforces the importance of recess and similar physical activity programs in schools, its authors believe.

If children are to develop and maintain the kind of aerobic fitness that amplifies their ability to learn, said co-author Charles Hillman, a professor of kinesiology at the University of Illinois and a fellow at the university’s Beckman Institute for Advanced Science and Technology, they should engage in “at least an hour a day” of vigorous physical activity. Schools, where children spend so many of their waking hours, provide the most logical and logistically plausible place for them to get such exercise, he said.

Or as he and his co-authors dryly note in the study: “Reducing or eliminating physical education in schools, as is often done in tight financial times, may not be the best way to ensure educational success among our young people.”