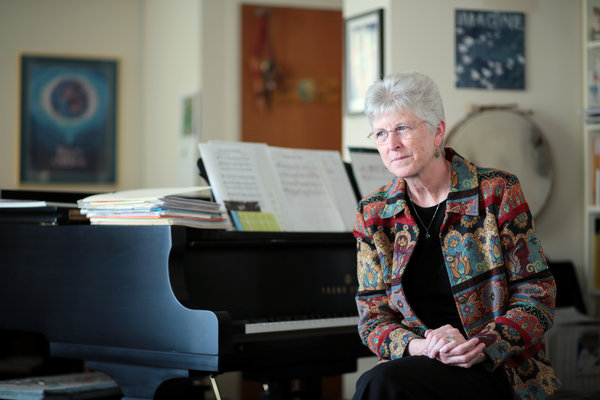 LA GRANGE PARK, Ill. — When Kathy Sherman was in college during the final years of the Vietnam War, she played the guitar with friends in her dorm room and sang folk and protest songs over bowls of popcorn. They sang Peter, Paul and Mary and Joan Baez, and some friends said her voice reminded them of Judy Collins.

Ms. Sherman graduated and joined an order of Roman Catholic nuns, the Sisters of St. Joseph of La Grange, but she never stopped making music. Last spring, when the Vatican issued a harsh assessment of the group representing a majority of American nuns accusing them of “serious doctrinal problems,” Sister Sherman, 60, said she responded the way she always does when she feels something deeply. She wrote a song.

The words popped into her head two days after the Vatican’s condemnation, as she was walking down the hallway in her order’s ministry center, feeling hurt and angry: “Love cannot be silenced,” she thought. “It never has. It never will.” She went into the center’s dining room and tried out the lyrics on some of her sisters. They liked the message.

“Love Cannot be Silenced” became an anthem, not just for the nuns but also for laypeople who turned out for vigils in front of churches and cathedrals across the country this year to support them. In a voice sweet and resolute, Sister Sherman sang, “We are faithful, loving and wise, dancing along side by side, with a Gospel vision to lead us and Holy Fire in our eyes” — a lyric that evokes the nuns’ novel forging of spirit with steel.

“I see it more as a song of affirmation than a protest song,” Sister Sherman, her gray-green eyes sparkling, said in an interview in October at her religious community’s ministry center here outside Chicago. “I wasn’t protesting anything. I was saying, ‘This is our story.’ ”

Sister Sherman’s story reflects the journey of so many nuns of her generation. She grew up in Chicago in the 1950s and ’60s, when Catholic women’s and men’s orders were booming and it was natural for a Catholic girl to consider a life as a nun. After college, she became a teacher at a girls’ school run by the Sisters of St. Joseph of La Grange, and was attracted to the order’s community life and its ideals of unity and inclusiveness. But by the time she entered the order in 1980, at age 28, the boom was over.

At the time, the sisters were in the midst of a major evolution. The Second Vatican Council, from 1962 to 1965, had decreed that religious orders should re-examine the writings of their founders in order to reconsider their particular mission and character, or “charism.” The U.S. Federation of the Sisters of St. Joseph sent a delegation to France to study the documents written by their founders — six women and a Jesuit priest. They concluded that their charism was far more expansive than just teaching and nursing.

“There it was, right in print,” said Sister Pat Bergen, who joined the order in 1963 and now serves on the congregation’s leadership team, recalling the excitement. “We can do anything women are capable of doing, as long as what we do enables unity to happen. So the sisters became prison ministers and artists and began following their gifts.”

Sister Bergen and Sister Sherman spoke over breakfast in the community’s sunny dining room, where women were preparing to set off for work dressed in everything from sweatsuits to tailored blazers and skirts.

Sister Chris March headed upstairs to her massage and healing practice. Sister Janet Bolger boarded a bus called the “School on Wheels,” a mobile classroom run by her order, where she and others teach immigrant adults English one-on-one. Sister Mary Southard went to her studio upstairs to paint. Sister Marianne Race, wearing a denim shirt stitched with the St. Joseph logo, descended to the basement where she manages St. Joseph Press, which produces calendars, notecards and wall hangings sold through the congregation’s “Ministry of the Arts.”

The Congregation of St. Joseph, with 650 sisters, was formed when seven independent groups of Sisters of St. Joseph merged in 2007. One member is Sister Helen Prejean, whose work with convicts on death row was the subject of the film “Dead Man Walking.”

Sister Sherman’s ministry evolved too. She composes popular and folk songs — she has recorded 21 CDs — as well as music for liturgies. She also leads spiritual retreats across the country, coordinates her community’s environmental sustainability effort and is helping to produce a curriculum on nonviolence for schoolchildren in the Chicago Archdiocese.

She used to live in the ministry center, but she now lives with two other sisters and a novice in a house nearby where she can garden and cook. She rises at 5:40 a.m., prays in her room for about 45 minutes and then joins the others in the living room for communal prayers. Many days she goes to work in her studio on the sixth floor of the ministry center, a complex that also houses an “eco-spirituality library,” rooms for low-income women and a modern sanctuary with stained glass windows designed by Sister Southard.

Her studio is a refuge, a long room dominated by a black Young Chang piano (a Steinway was out of reach). There is a prayer plant, a picture of her mother, who taught piano, and a plaque that says “It’s a Wonderful Life.” Her long fingers on the keys, she played pieces she wrote at pivotal moments: the start of the Iraq war; the murder of a nun, by an ex-convict, in a Buffalo halfway house she ran; the height of the political vitriol in the last presidential election, in a song she titled “This Is the America I Believe In.”

“A lot of the music I write is not religious, per se,” she said. “It’s got religious values, it’s got spiritual values. The songs may not name God, but they may name the hope, the peace, the love. For me, they are all names for God.”

That evening she met in the sanctuary with a women’s singing group she started recently out of the belief that people do not sing together enough anymore. There were four nuns and 11 laywomen, including one who had asked Sister Sherman over during a storm, around midnight, to sing to her dying mother.

Bouncing on her toes, Sister Sherman conducted as if the women were an orchestra. “Good! Pretty!” she shouted as they navigated unfamiliar lines in Xhosa in a South African piece. “Keep the rhythm going.” They ended with “Love Cannot Be Silenced.”

“It’s an anthem,” Sister Sherman told them. “Go ahead, stand up! Rise up!”