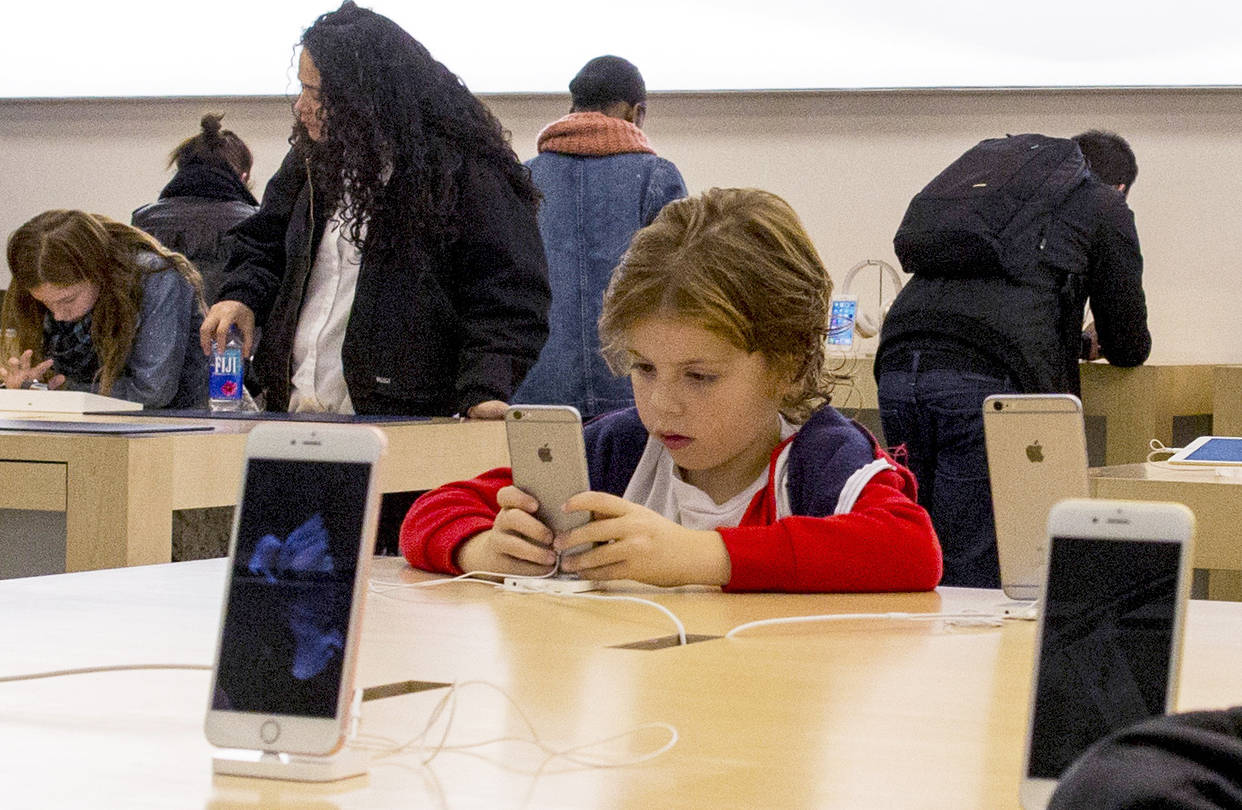 As kids take to electronics at earlier ages, parents need to take a closer look at their internet use. A child plays with an iPhone at the SoHo Apple Store in New York in October 2015. PHOTO: BRENDAN MCDERMID/REUTERS

Parents, it’s OK—essential, even—to spy on your children’s internet use.

Even if children don’t get lost in the internet forest, they can develop bad habits that are hard to spot day-to-day. This is the Big Parental Concern: Are we ruining our children with screens? What’s the middle ground between no tech and an internet and app free-for-all

The built-in restrictions on iPhones and Android devices give parents the ability to lock down many functions and set content filters for media and web browsing. Still, they don’t tell parents anything.

So a whole industry has developed around monitoring devices, both at home and away. These services, which often borrow tools used by businesses for managing company-issued phones, have a lot to offer: GPS tracking, time limits, daily usage reports, bedtime blackouts and content filtering. 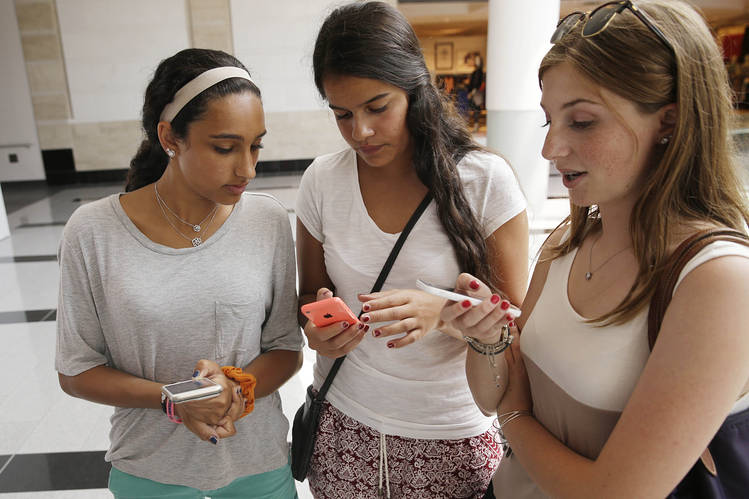 A whole industry has developed around monitoring use of mobile devices, both at home and away. PHOTO: SETH WENIG/ASSOCIATED PRESS

But add monitoring and you add to the ethical dilemma: Does keeping up with technology mean condemning our children to a parental police state? Before planting any virtual bugs, I sought absolution—or at least permission—from a leading parenting researcher.

“Monitoring is critically important for pre-adolescents and adolescents,” Alan E. Kazdin, professor of psychology and child psychiatry at Yale University and director of the Yale Parenting Center, told me. “Risky behavior starts at that time.” With dangers ranging from violent videogames to pornography, you’d be tempted to keep children away from machines entirely, but “homework is all online, so you can’t say no to web browsers,” he says.

Dr. Kazdin recommends ways to monitor children without feeling like a spy. But first, let’s talk about the tools.

Over the past year, we’ve seen an explosion of monitoring services that work anywhere, separating them from the networking products that have powered at-home parental internet controls. The services often use common elements: child-safe browsers, which funnel web traffic through servers to filter any naughty material; virtual private networks, which can filter all of a device’s traffic; and mobile device management, which gives control of certain functions to a remote IT manager—that is, the service. Parents get a web or app dashboard to control the settings. 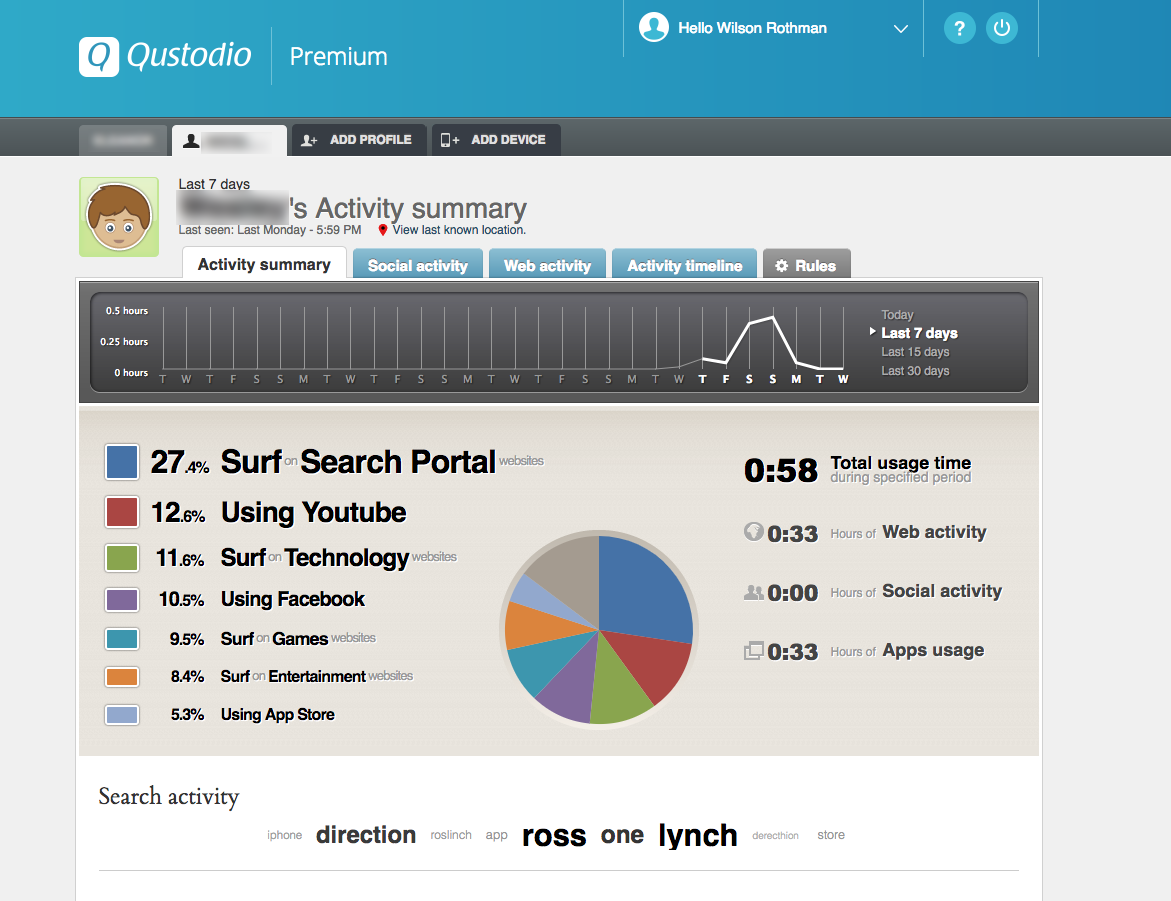 Likewise, Symantec Corp.’s SYMC -0.40% Norton Family service($50 a year) provides location, web and search supervision to all platforms, and replaces the iPhone’s mobile Safari browser with its own child-proofed one. But only on Android can it offer time limits and monitoring of apps, social networks and text messages.

If you want this level of access, Android really is the way to go. Google even offers its own free Android parental control system, compatible with certain recent devices. Just note: While Amazon tablets run a version of Android, they aren’t typically compatible with these tools. Amazon offers its own limited monitoring tool at parents.amazon.com.

Circle Go provides parents with a breakdown of the amount of time children spend on different apps, and lets parents pause internet access, set bedtimes and adjust content filters. Its developers decided to keep Android and iOS features equal, and are rolling out a system for children to earn screen time by completing chores or hitting fitness goals.

Previously only offered as a $5-a-month add-on to Circle Media Inc.’s parental-control networking hardware, Circle Go will be relaunched as a stand-alone service before the end of 2017. 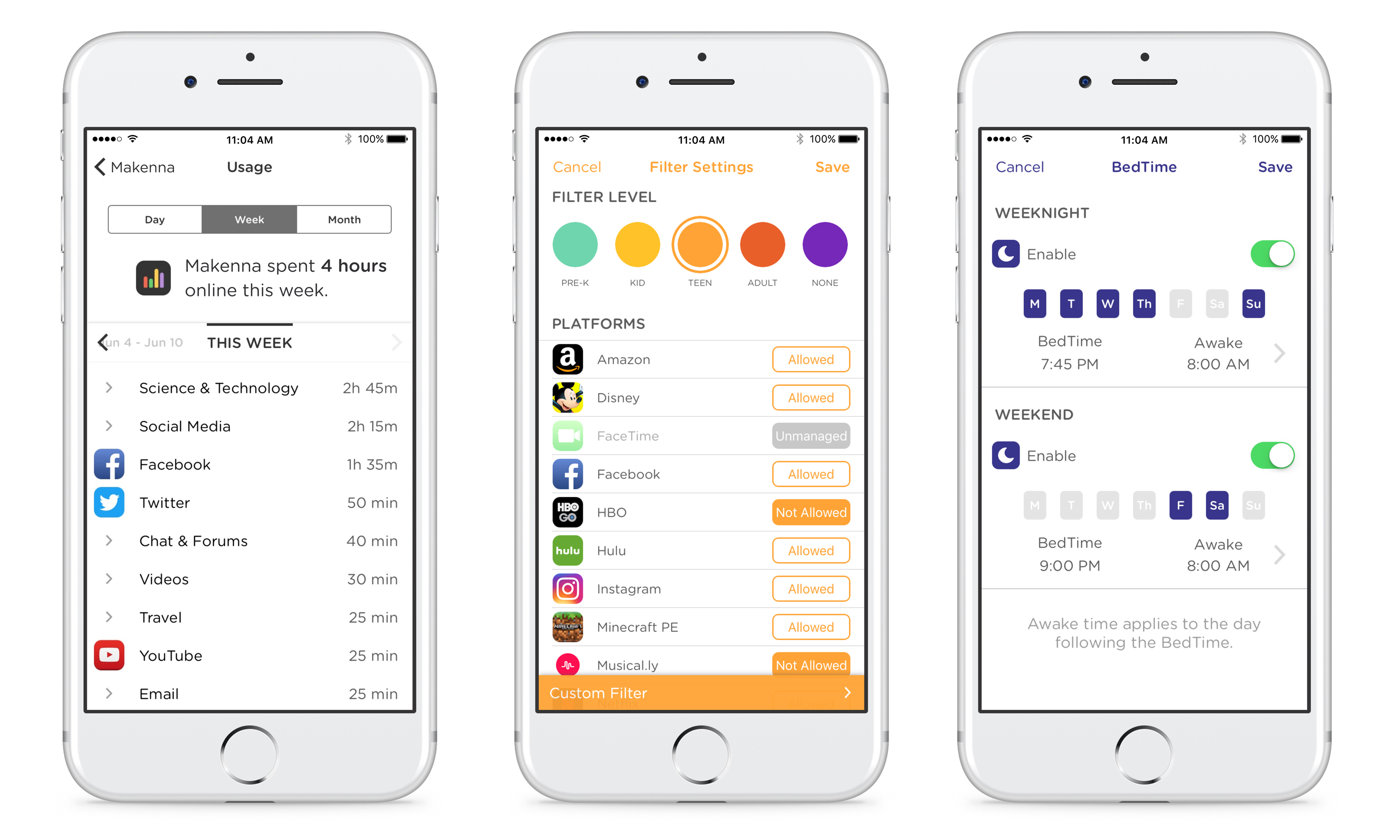 Circle Go, which will be relaunched as a stand-alone service before the end of the year, provides parents with a breakdown of time spent on different apps and lets them pause internet access, set bedtimes and adjust content filters. PHOTO: CIRCLE MEDIA

The closed nature of iOS can cause problems. Norton Family and Qustodio let parents make all of the icons disappear from their children’s screens as an ultimate “shut off” move. (Turning off the internet alone won’t stop children from using many game apps.) But when the apps come back, iOS arranges them in alphabetical order, not as they were. I never wanted to flip that switch, because it would have been cruel after my children arranged their icons so carefully into tidy folders. Mr. Gabel says Qustodio will soon fix this; Symantec says it’s looking for potential workarounds.

And then there’s the matter of the management profile, which gives the service control of the device: The child can find and delete it. If you want to know whether anyone is spying on your own iPhone, go to Settings > General, then look for Device Management. If it’s there, tap it to see which profiles are installed. Just note: It’s commonly found on company-issued phones, for your mutual protection.

When Circle founder Jelani Memory recently remarried, he put his company’s Circle Go software on his 14-year-old stepdaughter’s phone. “She took it off in half an hour,” he says. He argues that while it’s always good to be open about monitoring, a child deleting the profile can stoke conversation.

“For us, it’s really important that kids don’t feel like they’re being stuck inside a prison cell,” Mr. Memory says, “and that the social contract is enforced not by the app itself but by the parent and child.”

But Mr. Gabel at Qustodio says he would prefer Apple allow parents to lock device management and VPN settings as part of the built-in restrictions. Apple declined to comment.

While no service I looked at offers a perfect solution, they do offer limited free trials or plans. (For Circle Go, wait until the stand-alone service launches.) There are other tools out there that may tackle your specific concerns, so ask friends and family for recommendations, too. Just steer clear of services promising deeper iOS surveillance in exchange for your Apple iCloud login. Aside from the obvious security concern, they might not actually work as advertised.

Dr. Kazdin doesn’t advocate any particular child-monitoring software, but he encourages keeping tabs on children…openly. That means getting their buy-in.

“You say, ‘Here’s the situation: I need to know what you’re doing, and you need your freedom. Help me come up with something we agree on,’ ” Dr. Kazdin says. It’s important to give children a feeling of choice, even if they don’t really have one, he adds.

But he also warned there may not be an easy solution once bad behavior comes to light. “That’s when you turn righteous, turn into a police officer,” which won’t help things, he says. “Punishment doesn’t change behavior.” That too, must be a negotiation: “ ‘If we find out you were doing this, what do you think would be a fair consequence?’ ”

Then Dr. Kazdin said the most consoling/frustrating thing: “The challenges for us as parents are like never before.”

Write to Wilson Rothman at Wilson.Rothman@wsj.com