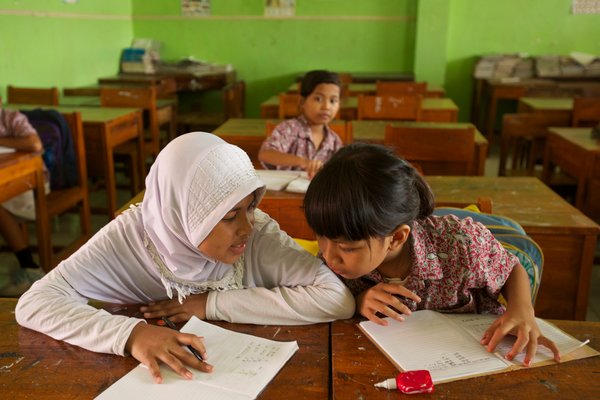 JAKARTA — Annisa Nurul Jannah, 11, was learning about how devices transmit heat, sound and electricity. “I like science because it teaches me a lot,” the sixth grader at Petamburan 04, a school in a working-class part of Jakarta, said about her favorite subject. “I’d be sad if it was removed from school.”

Millions of children in Indonesian elementary schools may no longer have separate science classes starting in June, the beginning of their next school year, if the government approves a curriculum overhaul that would merge science and social studies with other classes so more time can be devoted to religious education.

A draft of the proposal was posted online in November and December for public comment. The government is analyzing the feedback and will meet with a team of experts shortly to develop new lesson plans.

Ibnu Hamid, an Education Ministry spokesman, said feedback showed that people generally agreed with the curriculum changes but were worried that there would not be enough time to train teachers and prepare new books. The comments have not been released to the public, however, and some critics question whether they truly reflect broader opinion.

Officials who back the changes say that more religious instruction is needed because a lack of moral development has led to an increase in violence and vandalism among youths, and that could fuel social unrest and corruption in the future.

“Right now many students don’t have character, tolerance for others, empathy for others,” Musliar Kasim, the deputy minister of education, said in an interview in November. He proposed the changes in September.

He is part of a team of officials, academics and advisers from the office of Vice President Boediono working to streamline the curriculum in 2013.

Mr. Hamid said that the aim was to create a “balance between attitude, skills and knowledge.”

The draft curriculum released to the public in November was light on details. It did not outline how science and social studies would be taught once their dedicated classes were eliminated, or describe how religion and civics would contribute to character building.

Indonesia is a Muslim-majority country with a secular government that recognizes the rights of six different faiths, including Catholicism, Protestantism, Buddhism, Hinduism and Confucianism.

Religion is taught to students according to their own faiths, meaning that Muslim students are instructed in Islam, while Christian students study Christianity in separate classes. Reflecting the country’s demographics, most religious instruction is Islamic.

The Ministry of Religious Affairs, which advises the Education Ministry, is proposing that religious education be increased to four hours a week from two. It will remain a compulsory subject, along with mathematics, arts and crafts, physical education, Indonesian language and civics.

Just days after the ministry went public with the draft, parents, civil society organizations and members of the teachers’ federation began an online petition calling the changes unfounded.

“Instead of improving the curriculum, these changes dismantle the existing curriculum and do not guarantee better education in Indonesia,” states the petition, which has received more than 780 signatures.

The proposal to eliminate dedicated science and social studies classes has led to an outcry among parents and educators who worry that it could lead to a dumbing down of the country and make it less competitive.

Indonesia, a vast archipelago with more than 240 million people, has one of Asia’s fastest growing economies. Its attempt to improve its manufacturing and service industries is tied to its efforts to produce more skilled workers. Officials in the trade and manpower ministries have urged more training in areas like computer science.

Critics say the proposed changes will take the country in the opposite direction.

Teachers at Annisa’s school in Petamburan say science and social studies are practical classes that teach children to ask questions, identify problems and find solutions. They would be difficult to integrate into other instruction.

“Children learn to understand new things through science,” said Edi Kusyanto, principal of Petamburan 04. “It stimulates their spirit to learn, their curiosity.”

One criticism of the proposed changes is that they overlook more crucial reforms needed in the education system.

“Our government is being reactive,” said Itje Chodidjah, an education expert who has advised the government on previous curriculum changes. “They think the solution to violence is more religious education, when there are a lot of causes and one of them is problems in the schools themselves.”

In much of rural Indonesia, teachers often fail to turn up to school, local administrations do little to monitor the quality of instruction, and books are dated or inadequate. Education experts say that many teachers lack basic knowledge about the current curriculum and are ignorant of the fact that they are allowed to develop their own course plans. Even in cities like Jakarta, schools in poor neighborhoods like Annisa’s lack resources and well-trained teachers.

Teachers need to be better trained on how to implement the current curriculum and teach religion in a way that is not dogmatic, said Ms. Chodidjah. She added that officials had little understanding of the conditions in most schools and failed to recognize that low teaching quality had made Indonesia a global laggard. A report released in November by Pearson and the Economist Intelligence Unit, which ranked national education systems, placed Indonesia at the bottom of its list of 40 countries.

But officials who back the proposal say that the government has a responsibility to prepare children to be better citizens, which means providing them with them moral and religious instruction.

Over the past year, analysts have noted a rise in religiously motivated violence, with recent clashes between hardline Islamists and minority religious groups including Christians, Shiites and the Muslim sect Ahmadiyah. A recent survey by the Setara Institute, a human rights group, recorded 371 acts of religious violence in 2012, marking a 25 percent increase from the previous year.

Some officials blame such incidents on a lack of character development in schools.

“You can see that we are getting more intolerant,” said Bambang Widianto, a member of the advisory team from the vice president’s office. “Students cannot accept that there are people that have different religions and come from different backgrounds. It’s scary, actually.”

Kamaruddin Amin, secretary of the directorate general of Islamic education at the Ministry of Religious Affairs, said religious values could prevent misbehavior.

He brushed off concerns that more religious instruction would have a negative impact on the education system.

Some lawmakers on the House of Representatives commission overseeing education and youth affairs agree that prayer and worship should be promoted in school.

But critics of the proposal do not think that a curriculum overhaul is the answer. Some teachers worry that government and religious leaders are oversimplifying the problem and are using terms like “character building” and “morality” to justify more religious education.

Indonesia has set aside 171 billion Indonesian rupiah, or almost $18 million, to draft a new curriculum, but many worry that the money will be wasted if attention is not put toward improving the education system as a whole.

“To change the curriculum, you have to train the teachers, you have to provide the books,” said Lestia Primayanti, who teaches first grade at Kembang Elementary School in Jakarta. “Indonesia is a very big country. Change is not as easy as flipping your hand.”