Kids who constantly use phones and computers tend to be more nervous in face-to-face conversations. What can teachers do to help?
ALEXANDRA OSSOLA JAN 14 2015

Stress about a meeting that is still a week away, handwringing before talking to the cashier in the grocery line, worrying about seeing an acquaintance on the street—for people with social anxiety disorder, even the simplest task can prove challenging. The symptoms of social anxiety often set in around adolescence, when people place a new emphasis on social interactions and their place in their peer groups. But some academics fear that greater access to technology could exacerbate social anxiety among teens, particularly as smartphones, tablets, and computers become omnipresent in and out of the classroom. And even though teachers are increasingly exploiting the devices as learning tools, they also play an integral role in stemming the tide of social anxiety.

“If we are glued to technology 24/7, it’s going to have an effect on social skills—it’s just natural,” said Tamyra Pierce, a journalism professor at California State University, Fresno. The clear link between technology and social behavior makes it all the more important that teachers who embrace these devices need to keep students’ social skills in mind.

Teens are using social media as a crutch, a replacement for the in-person interactions that help them develop socially.

An estimated 15 million Americans have social anxiety disorder, according to the Anxiety and Depression Association of America, and symptoms usually start around age 13. More than just shyness, social anxiety causes people to fear the judgment and scrutiny of those around them. People with social anxiety often have concurrent disorders like depression. The disorder can affect every aspect of a person’s life, from academic performance to self esteem; in severe cases, social anxiety can be debilitating, keeping sufferers in bed and out of public places to avoid confrontation. But almost everyone suffers from at least a little social anxiety, says Thomas Rodebaugh, a psychology professor at Washington University in St. Louis. “We’d be worried about someone who never experiences any social anxiety,” he said.

Social anxiety differs between individuals, so it makes sense that the relationship between technology and social anxiety is murky and is often varies case to case. For some sufferers, technology can increase social interaction. One 2012 studyfound that people with low self-esteem who may be reluctant to talk about themselves with peers face-to-face feel more comfortable sharing personal information on Facebook. Researchers who conducted another 2006 studyconcluded that social media can “strengthen community engagement and attachment” in some people. Pierce recalls teens with disabilities that, in spite of their apprehension about talking with the opposite sex, were able to approach their crushes through technology. “Once they felt like they were doing okay [online], then they could continue the conversation face-to-face in a more comfortable state,” Pierce said. “The anxiety was lessened by using technology, but that’s more the exception than the rule.”

Pierce says it’s the exception because she has personally seen an increase in social anxiety among her plugged-in students over the years she has been teaching. “Now young people can’t look you in the eye, they get antsy talking to you in person,” she said.

So, in 2009, Pierce conducted a study to test the relationship between technology and social anxiety. She asked teenagers how often they use “socially interactive technologies,” like instant messages and texts, and then assessed how comfortable they felt talking to people face-to-face. Pierce found that the more the students spent using online communication methods, the more likely they were to show symptoms of anxiety about communicating face-to-face. What’s more, teenage girls showed much more anxiety than did their male peers.

“Now young people can’t look you in the eye, they get antsy talking to you in person.”

These conclusions left Pierce with a chicken-and-egg problem: “Was it the use of technology that has created a heightened sense of anxiety about talking to someone face to face, or did it start with social anxiety that led to increased use of social media?” Either way, though, she hypothesizes that teens are using social media as a crutch, a replacement for the in-person interactions that help them develop socially. “It’s going to take a lot more research because, as I’ve seen in my other research about social media, due to excessive use of cell phones, teens and young people alike are not talking face to face. It’s hampering their social skills,” she said.

But Rodebaugh, the psychologist, is skeptical that technology is to blame for social anxiety among teens. “What we’ve seen from some of my students’ studies is, if you’re the sort of person who is going on Facebook to interact with people you expect to see sometime in the future, you’re going to interact with them in the real world,” he said. There’s no evidence that using technology that way has a negative effect, he added. But he agrees that adolescence is a pivotal time in a person’s social development and, as future studies probe the relationship between social anxiety and technology, “[adolescence] is a good place to look for it.”

In the years since Pierce’s study, digital communication has become even more common. Between 2011 and 2013, the percentage of teens who had smartphonesincreased from 23 percent to 37 percent. In 2012, 81 percent of teens used some form of social media.

Anecdotally, both Pierce and Rodebaugh have seen more laptops and cell phones in the classroom. Constant pings of texts and Facebook notifications can sometimes distract students, pulling them away from their face-to-face interactions and into the virtual world of digital communication. One 2013 studyfound that the average person unlocked his or her cell phone more than 100 times per day. “It’s much easier to look at a phone than to look someone in the eye,” said parenting blogger Vanessa Van Petten in a 2013 Washington Postarticle. 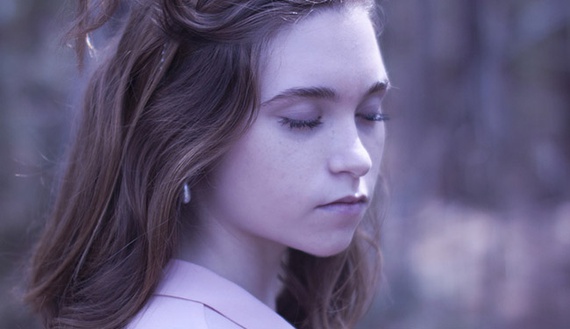 Technology is increasingly a primary means for socializing among teens. But it’s not clear whether this has had an effect on the number of people with social anxiety. “We don’t have data that is that intensive [about social anxiety] over the past five years,” Rodebaugh said. Even though social anxiety is one of the most common anxiety disorders (about12 percent of adults will have it at some point in their lives), researchers aren’t yet able to determine how its prevalence has changed over time; there’s still little consensus on the causes of the disorder. So there’s no proof that an increased use of technology over the past five years has led to a greater prevalence of social anxiety. Pierce plans to conduct an updated version of her 2009 study in the near future, which may shed some light on the issue.

Regardless, even if the link between technology and social anxiety were clearer, banning it in the classroom seems increasingly unlikely. Teachers from kindergarten onward are embracing laptops, iPads, and video games as educational tools, using them to help students visualize complex topics in a whole new way, despite the distraction caused by texts and social media. “Unless there were some sort of attempt to ban technology from the classroom, [that technology] will be there when most people want it to,” Rodebaugh said. “I haven’t yet made a particular policy [restricting the use of technology in the classroom]. But I’ve considered it, and I assume at some point I’ll have to.”

Pierce doesn’t think that’s the solution, though. “It’s not a matter of use or no use, it’s what kind of use,” she said. “When we take away all face-to-face communication and our young people stay in their rooms and stare at their screens, we do them a disservice.” A good comparison, she says, is how people view tests—some prefer multiple-choice while others want only open-ended questions. Using technology in the right way means giving students a balance and options with their devices, both academically and socially. “We can’t lose the social skills, we can’t lose the technology—we have to have both. We have to go back to that balance,” Pierce said.

For teens that feel socially anxious, Pierce suggests that they use technology less at home (especially for those who let it disrupt their sleep). Rodebaugh added that there are a number of treatments for social anxiety, which involve medication or therapy. “People don’t have to continue to suffer if they don’t want to,” he said.